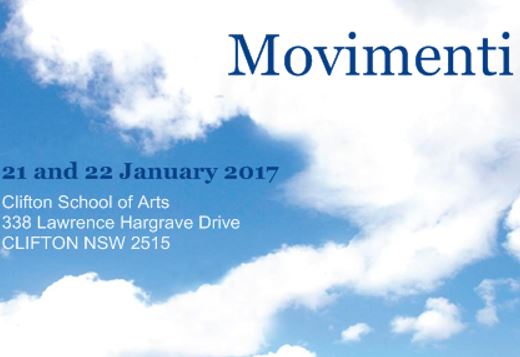 Movimenti – an exhibition of new paintings by Richard Perin

Movimenti is an art exhibition showcasing the painted art work of Richard Perin. It is being held at the Clifton School of Arts from 21 – 22 January 2017 – 9am – 4pm. This is Richard Perin’s first showing as a painter. He has sold numerous art works and he has previously made headlines across the world, when one of his artworks was banned at a Community festival.
In the words of the artist, “Movimenti is a cultural reference to the ‘futurist’ artistic movement begun in Italy in 1909, which strongly rejected traditional forms and embraced the energy and dynamism of modern technology. In its current showing, the movement being captured is found in the natural environment, and the subject matter pays specific attention to clouds”.
“Clouds are important because no two clouds are the same, and yet we seem to take them for granted, and imagine that perhaps they are indistinguishable. The more often we see the things around us – even the most beautiful, unique and wonderful things like clouds – the more they become invisible to us. Because we see them so often, we see them less and less. In the same way, we seem to be destroying our natural environment, and losing sight of the most fulfilling of things – like just watching clouds!”
“Movimenti is also the main Italian word for movement and it can have many other meanings and associations including; emotion; the process of making something happen out of nothing, the motion of a thing, or even perhaps a collective way of seeing or doing things”.
Richard Perin is an Australian born artist with Italian and French heritage, and who lives in Thirroul. He is also an award winning and published poet. He is also an avid photographer whose photographic work can be found on his public instagram page at richard.perin
His painted style of work relies on broad brush strokes, thick texture, simple tones, and primary colours. In his own words “the gift of having astigmatism”.
Richard can be contacted on 0418158139 or richard.perin@gmail.com